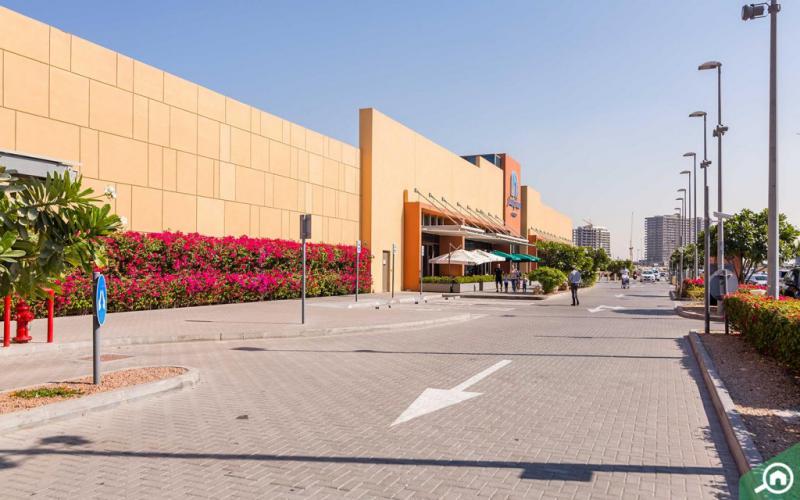 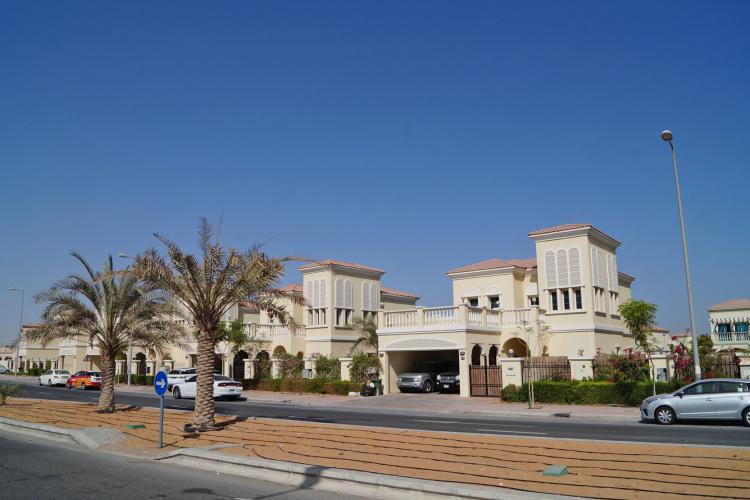 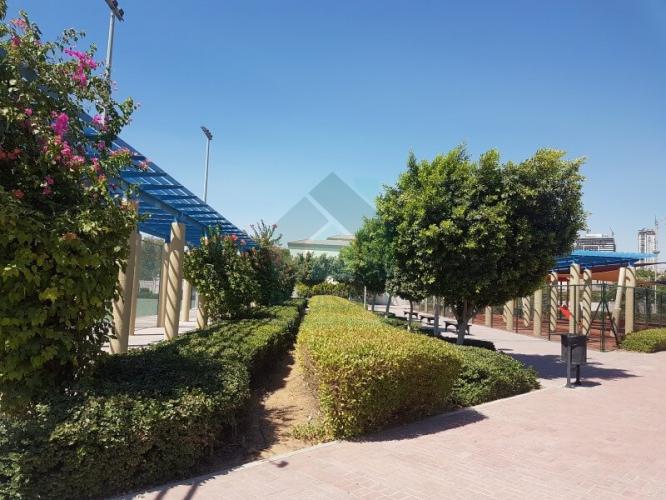 District 8M (also known as District 8 Block M) is one of the residential clusters in Jumeirah Village Triangle. Developed by Nakheel, JVT offers modern lifestyle amenities in a village-like peaceful setting. Occupying a prime location in the city, the community is bound by major highways, including Al Khail Road, E44 and Sheikh Mohammed Bin Zayed Road, E311. It is one of the most family-friendly neighbourhoods in Dubai.

Residents in JVT District 8M can enjoy all communal facilities. They live in a closely-knit community with recreational facilities well within reach. JVT Pond Park and tennis courts are also in proximity. Some key points of interest for living in JVT include:

As part of a family-centric neighbourhood, District 8 Block M features all kinds of modern amenities expected from any other Nakheel project. Also, JVT is one of the most pet-friendly communities in Dubai. Residential properties are arranged in homogenous clusters surrounded by lush greenery. Since the main road is in proximity, residents enjoy convenient access to other residential and commercial neighbourhoods while the community has a calm and quiet environment.

Most properties in District 8M are already occupied or sold out. As for the types of units in this cluster, one may find duplex houses. There are mostly 2-bedroom villas spanning across 2,000 sq. ft. Residential units feature Mediterranean architecture with private lawn and rooftop terrace. Each villa also features dedicated parking space, built-in wardrobe and fitted kitchen. District 8M is a villa-only cluster in one of the most family-friendly areas in Dubai. The sale price of villas in District 8M starts from AED 2.4M.

District 8M is bound by a few major highways of the UAE. Those who drive can get to Al Khail Road E44 within 7 minutes and Sheikh Mohammed Bin Zayed Road E311 in around 5 minutes. Also, residents will find covered parking spaces in District 8M with a capacity to accommodate up to two vehicles. Visitors can find a free spot on the street.

Those who would prefer public transportation near District 8M can consider hiring a taxi from outside the community gates. One can also book an online cab or board in a bus from the station close by. Bus link F 31, F 34 and J 01 stop at the stations in the neighbouring communities, Meadows, Spring Dubai and Production City.

These are some supermarkets near District 8M, JVT:

Residents can shop for groceries from Triangle Supermarket. It is a go-to mart for most residents in Jumeirah Village Triangle. Other options like FMart and Cherry Grocery are also within the community but in different clusters. You can access these supermarkets by car within 5 minutes. Moreover, an outlet of Spinneys in JVC is approximately 12 minutes away.

Muslim residents can offer prayers at JVT Mosque near District 8M. It is accessible in around 4 minutes by car. Jummah Mosque in the neighbouring community, Production City and Me’aisem Mosque in the City Centre, are also nearby.

OTHER PLACES OF WORSHIP NEAR DISTRICT 8M

Churches in Jebel Ali are accessible in around 15 minutes by car. One can conveniently visit The International Nepalese Community Church, The Metropolitan Mark Chords, St. Francis of Assisi Catholic Church (also known as Jebel Ali Church), the United Christian Church of Dubai and others. The Sikh community can also find the world’s first ISO certified gurdwara: Guru Nanak Darbar.

Some nurseries close to the area include:

Jumeirah International Nursery is a popular option within Jumeirah Village Triangle. It is one of the most affordable nurseries in Dubai. District 8M residents can easily access Jumeirah International Nursery in less than 5 minutes by car. Raffles Nursery is in Emirates Hills, accessible in less than 10 minutes by car. Kids Kingdom Nursery is 15 minutes away in IMPZ. Some of Dubai’s top schools are also in proximity to District 8 Block M, JVT such as:

Dubai British School is one of the most notable British schools in Dubai. There are two branches of this school, and both are conveniently accessible from JVT District 8M. Moreover, Sunmarke School offers the IB curriculum as well as a pre-school program. The institute is accessible in around 2 to 3 minutes by car.

CLINICS AND HOSPITALS NEAR DISTRICT 8M

These clinics and hospitals near District 8M are easily accessible by car:

Mediclinic Meadows in The Meadows and American Hospital Clinic in Al Barsha South are specialty clinics. There are quite a few branches of Mediclinic in different areas of Dubai.

Emirates Hospital and Mediclinic Parkview Hospital are two of the most reputed hospitals in Dubai. These are easily accessible from JVT District 8 Block M within 15 minutes.

District 8M lies amidst the other residential clusters in JVT. District 5, 6 and 7 are some immediate neighbours. The area is also in proximity to sub-communities in JVC including District 12K and Seasons Community. Other areas in proximity include:

Jumeirah Village Circle (JVC) is a sister community of Jumeirah Village Triangle (JVT). The two neighbourhoods are connected via highways. Dubai Production City is towards the southern border of District 8M while The Springs is farther away to the north. Main highways connect JVT District 8M to key locations such as Al Barsha South, Dubai Sports City and Golf City.

Most shopping malls near District 8M, Jumeirah Village Triangle are community centres. The popular options close by include:

The Springs Souk is around 8 minutes away. Al Khail Avenue is approximately 3 minutes away from District 8 Block M. Once completed, it will offer a range of entertainment facilities and retail stores. Moreover, City Centre Me’aisem in Production City is around a 10-minute short drive away from District 8M. There are many high street brands, retail stores and restaurants in the city centre.

There are some fine-dining restaurants near District 8M including:

Amigo’s Pub is also in proximity. Other popular restaurants in the vicinity include:

If you are going to the City Centre Me’aisem, you will find a wide range of restaurants like Paul Bakery and Restaurant, Lelia, Gazebo and Patchi. An outlet of Baskin Robbins and Starbucks is also there.

All the grand beaches in Dubai are an approximately 20-minute drive away from District 8M JVT. Those looking for a day out in the sun can prepare for a long drive to Jumeirah Public Beach, Kite Beach or Marina Beach. These beaches offer a range of activities for kids and adults alike. If you are looking for water sports places, you can visit Kite Beach, which is about 22 minutes away from sub-communities in Jumeirah Village Triangle.

District 8 Block M, JVT is easy to locate. It is in proximity to notable landmarks and leisure attractions, including:

Miracle Garden is one of the most family-friendly places in Dubai. It is usually crowded on weekends. Emirates A-380, Cabanas, 3D floral designs, heart passage and various cartoon characters carved out of flowers attract residents and tourists throughout the year. It is accessible in around 15 minutes by car.

Those fond of beautiful butterflies can also visit the Butterfly Garden.

Dubai International Cricket Stadium is around 12 minutes away from District 8M. Motorsports fans can find the Dubai Autodrome at the same distance.

District 8M is part of a self-sustained neighbourhood in Dubai. It features an active environment. There are tennis courts, jogging tracks, kids’ playgrounds and family parks in closer proximity. A few gyms including Hyati Fitness Club and Dungeon Gym are easily accessible. Moreover, residents in District 8M can access Jebel Ali Racecourse in around 10 to 12 minutes.

Address Montgomerie and Taylor’s Golf House are around 10 minutes away from the district. Those looking for relaxing beauty sessions can head to NStyle Beauty Lounge and Aura Beauty Salon.

District 8M only has limited properties on offer. Moreover, public transportation options are limited in most parts of JVT. Unlike the mainland of Dubai, metro stations are not yet developed for JVT. However, those who move to District 8M can easily access bus stations or hire a taxi.

Are you looking to buy property in District 8M?