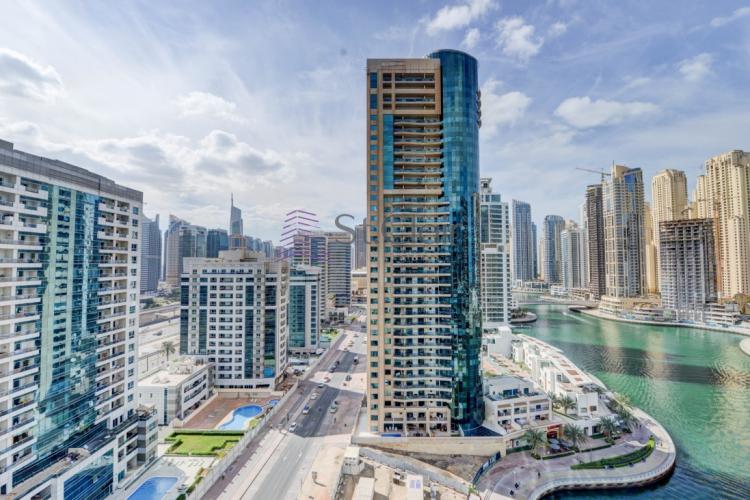 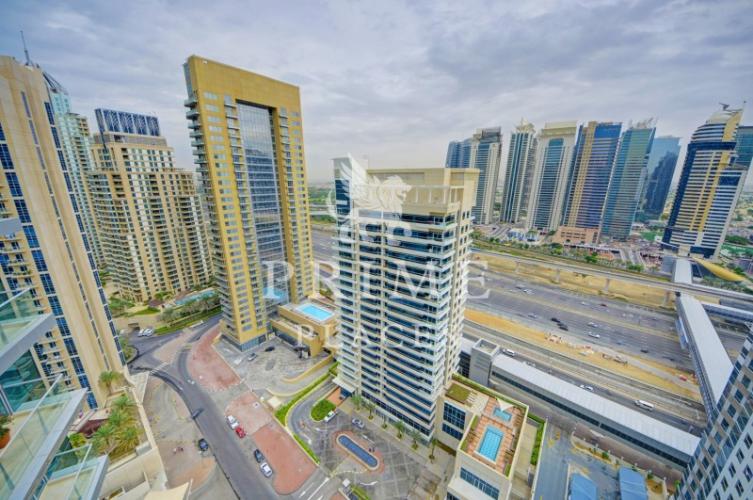 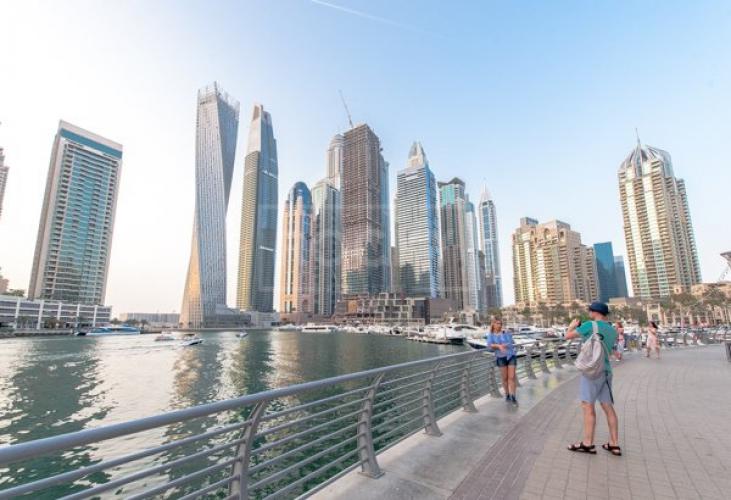 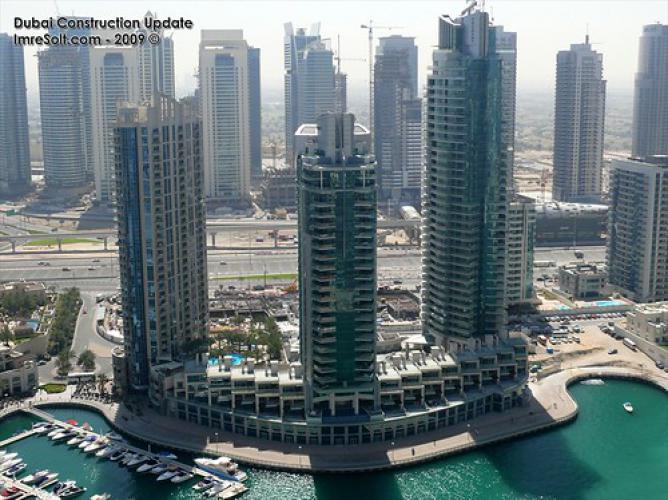 In addition to the high-rise buildings and waterfront villas, the complex has a health centre, banquet hall, laundry area, infinity pool, children’s play area and a billiard room. Trident International Holdings has developed the project while the design is attributed to Archon Consultants. Construction of the project started in 2004 and completed in 2008.

Trident Marinascape is located in Dubai Marina, one of the affluent neighbourhoods in ‘New Dubai’. As per Bayut and Dubizzle Real Estate Market Report for Dubai 2020, the community ranked first among apartments for rent in the city.

Along with Oceanic Tower and Avant Tower, Marinascape Marina Homes also form part of the Trident Marinascape complex. The row of waterfront villas consist of a basement and two floors above ground, totalling four floors. Moreover, the villas offer views of the marina and have been developed with the latest amenities and interior.

Marinascape Marina Homes consist of 4-bed and 5-bed luxury villas. The 4-storey waterfront villas have a basement and two floors above ground. Along with their own hanging gardens, the villas also feature rooftop terraces, maid’s and driver’s rooms, storage rooms and study rooms in addition to bedrooms with attached bathrooms.

Each villa includes a garage and two internal lifts and offers a view of the marina. The built-up area of the villas ranges between 9,000 sq. ft. and 15,000 sq. ft.

To buy a villa in Marinascape Marina Homes, you can expect to shell out from AED 17M to AED 21M. For villas in other configurations, you can also check out other villas for sale in Dubai Marina.

Marina Hotel Apartments lies just adjacent to the Marinascape complex and offers a variety of suites, from 1-bedroom units to duplex 3-bed units too. There are many hotels in Dubai Marina close to the complex, easily accessible within a 5-minute drive.

A few of the renowned hotels near Marinascape Marina Homes are:

Address Dubai Marina belongs to the chain of 5-star Address hotels in Dubai. Dubai Marriott Harbour Hotel and Suites also ranks as one of the top hotel apartments in Dubai Marina.

Every villa comes with a garage that can accommodate from two to six cars at a time as well.

Dubai Marina enjoys a prime location in the city and its residents can benefit from the various modes of transportation in Dubai at their disposal. In addition to being close to the Dubai Metro, the community is home to Dubai Tram as well.

One can find many metro stations near Marinascape Marina Homes, which can be reached in 10 minutes by car. DAMAC Properties Metro Station is accessible by foot through the pedestrian bridge that crosses into the neighbouring JLT area. DMCC Metro Station and Jumeirah Lake Towers Metro Station are both located at a 10-minute drive.

The Dubai Tram line runs from Al Sufouh to JBR, which makes it convenient for Dubai Marina’s residents to travel using the tram too. Some of the tram stops near Marinascape Marina Homes are Dubai Marina Tram Stop, Marina Towers Tram Stop and Dubai Marina Mall Tram Stop.

For quick groceries, you can find Marina Fresh Supermarket and Express Blue Mart within the Marinascape complex. Other supermarkets near Marinascape Marina Homes include:

Each of these supermarkets ranks amongst Dubai’s best supermarkets. You will also find a branch of Spinneys in Dubai in Emaar Towers for high-quality organic items, ready-to-go food and branded Spinneys ice cream.

Along with a number of community mosques, Muslims can head over to Mohammed Bin Ahmed Al Mulla Mosque for everyday prayers. Many buildings in Dubai Marina feature their own prayer halls too.

OTHER PLACES OF WORSHIP NEAR MARINASCAPE MARINA HOMES

The community lies in proximity to many of the churches in Dubai, which are in Jebel Ali. Some of the closest churches near Marinascape Marina Homes include:

Guru Nanak Darbar Gurudwara is reachable within a drive of 13 minutes from the complex. In addition to being a go-to worship area for the Sikh community in the UAE, the Gurudwara attracts a number of visitors from other faiths and hosts many religious festivals throughout the year.

Within a drive of 6 to 9 minutes, residents will find a number of nurseries in Dubai Marina. Some of these include:

The community does not have any schools, which is why residents will have to drive a minimum of 10 minutes to access any of the schools near Marinascape Marina Homes. Some options are:

Regent International School is 10 minutes away. It follows the National Curriculum of England and ranks as one of Dubai’s renowned British schools. The school is located in The Greens and offers primary education for students aged from 3 to 11 years.

American School of Dubai (ASD) offers classes from Pre-Kindergarten to Year 12 based on the US curriculum. Founded by the Dubai Petroleum Company, the American School of Dubai is amongst the top American schools in Dubai. Delhi Private School is 15 minutes away in Jebel Ali and follows the CBSE curriculum. It ranks amongst the best Indian schools in Dubai.

You can avail medical treatment and medical care at any of the clinics and hospitals near Marinascape Marina Homes, such as:

Marinascape Marina Homes in Dubai Marina is close to many affluent and newly established communities, such as:

Malls near Marinascape Marina Homes include:

Ibn Battuta Mall is only 12 minutes away. The mall is an amalgamation of six zones and exhibits architecture of the countries that Ibn Battuta explored. Covering 521,000 sq. m. of area, the mall has more than 500 shops along with a food court and entertainment options like Fun City, Sky Zone, Switch Bowling and Chuck E. Cheese.

Mall of the Emirates is reachable within 14 minutes. Located in Al Barsha, it is one of the best malls in Dubai with 630 plus stores, two 5-star hotels and activities such as Ski Dubai, Yalla! Bowling, Magic Planet and a VR Park.

Marinascape by Trident houses a number of restaurants and cafes so that residents can enjoy a number of dining options at their disposal. Some of these eateries also rank amongst the best restaurants on Dubai Marina Walk and they include:

Nando’s is a world-famous South African restaurant chain that is best known for its signature peri-peri chicken. Mazah is a Lebanese restaurant while both L’ Amoroso Ristorante e Café and Casa Del Bene serve Italian as well as Lebanese items.

Outside of the complex, you will stumble upon many fine dining restaurants in Dubai Marina, along with clubs and bars too. Some of these options include:

Dubai Marina lies only 5 to 10 minutes away from the coastal side of Dubai. Both JBR Beach and Al Sufouh Beach can be reached in 10 minutes from Marinascape Marina Homes.

JBR Beach is a thriving beach with many retail outlets, eateries and recreational activities to offer. You will also find the Warehouse Gym, Roxy Cinemas and a splash pad at this lively beach.

On the other hand, Al Sufouh Beach is a quaint beach that is also known as the ‘Secret Beach’. The beach is hidden amidst a cluster of 5-star hotels in the area and can be reached through your own vehicle only. It is a preferable choice for those wishing to enjoy the sea waters in tranquillity.

Dubai Marina boasts of many activities and recreational activities. Those residing in Marinascape Marina Homes will never run out of things to do in Dubai Marina, whether it includes retail therapy, dining or nightlife.

Marina Walk or Dubai Marina Walk is right beside the Trident Marinascape complex. The waterfront promenade features a wide variety of restaurants, cafes, retail outlets, play areas and spas too. You can stroll, even cycle on the promenade and take part in mosque tours too.

The clubs in Dubai Marina offer a thriving nightlife along with sumptuous food and engaging company, such as Zero Gravity, Barasti Beach and Amadeus Club. Another activity that intrigues individuals is the yacht and dhow cruises in Dubai Marina. What sets these dhow cruises apart is that you can revel in private buffet dinners with live entertainment too.

Marinascape complex consists of Aqua Centre, which is a leisure centre as well as a fully-equipped health club.

For outdoor green spaces, JLT Park is the closest option at a 10-minute drive. Dubai Marina itself does not have many parks or green spaces, but it houses a number of gyms, fitness centres, spas and salons.

You can also enrol yourself in any of the yoga classes in Dubai Marina for reaping the benefits of meditation and yoga on a whole. Many of these classes are held online as well, thus proving convenient for those who wish to practice the discipline at home.

The Marinascape complex lies close to a number of gyms in Dubai Marina, such as:

You can unwind as well as fulfil your personal grooming needs with ease, thanks to the abundance of salons and spas in Dubai Marina. Many spas are available within the Marinascape complex, such as:

Since the complex is close to Dubai Marina Walk, residents can enjoy different kinds of festivals held every now and then, which are organised by Emaar and other organisations. Dubai Marina Mall also hosts many festivities throughout the year. The hotels in the area organise Iftars and Suhoors in Ramadan too.

For those interested in living in Dubai Marina, Marina Homes are a viable option. Not only do they offer luxury living with breath-taking views, but the complex also has all sorts of facilities to keep the residents satisfied.

However, the villas only come in 4-bed and 5-bed configurations. Individuals interested in 2 or 3-bedroom villas can look for other options instead.

Are you looking to rent or buy a villa in Marinascape Marina Homes?